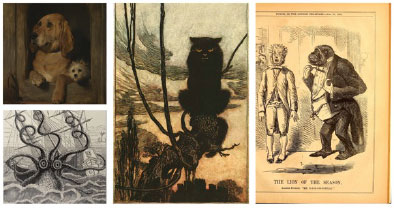 No single attitude fully encompasses our paradoxical relationship with animals: we love them, we kill them, we preserve them, we cage them, we eat them, we dress them, we wear them, we imagine their inner thoughts, we damage their physical bodies, and we define our humanity both against and in relation to our understanding of them. Many of these contradictions came into focus during the Victorian period in 19th-century Britain. The Victorian period saw the birth of animal protection movements, an increasing sentimentality about household pets, the growing popularity of vegetarianism, the initiation of dog and cat shows, the opening of the London Zoo, debates about medical experimentation on animals, and the publication of Charles Darwin’s On the Origin of Species. Tracing the current discourse of Animals Studies back to the Victorian period, we will read literary, scientific, political, and theoretical texts that began this cultural conversation about our interactions with, treatment of, and similarity to other animals. Possible readings include Anna Sewell’s Black Beauty, Rudyard Kipling’s The Jungle Books, Emily Brontë’s Wuthering Heights,and Bram Stoker’s Dracula, short stories by Edgar Allan Poe and Margaret Gatty, poety by Elizabeth Barrett Browning and Alfred Lord Tennyson, paintings by Edwin Landseer and Rosa Bonheur, taxidermy displays by Carl Akeley and Walter Potter, scientific studies by Charles Darwin and T.H. Huxley, as well as theoretical interventions by Jacques Derrida and Donna Haraway. We will read 19th- and early 20th-century literary works in their original historical contexts and alongside recent critical developments in Animal Studies to think through our interactions with animals, their relations to us, our responsibilities to them, and their challenge to the boundaries between us and them, nature and culture, and even life and death.

What has the transpacific turn in Asian American literature wrought? Criticism and theory since the 1990s has demanded a transnational reckoning that has upended the field, complicating the homeland-destination binary and bringing forth another dimension in a heretofore largely domestic-oriented field of literary study.  Consequently, the field has flowered in its expansive, inter- and multi-disciplinary ventures; at the same time, that turn has heralded difficult questions of both political and practical natures as the field has had to wrestle with matters of self-definitions beyond essentialist tokens and convergences/conflicts with adjacent fields such as area studies.  This course will trace that theoretical history and its parallel fictions through critical works such as Immigrant Acts, Cold War Ruins, Imagine Otherwise, and novels such as The Sympathizer, Through the Arc of the Rain Forest, and A Gesture Life.)

(In a world in which (as with almost all other literary schools) the “experimental” designation has until recently largely excluded most women writers and writers of color regardless of how they may define themselves, it’s worth pausing to ask questions, beginning here: “What is ‘experimental writing,’ who falls (and historically might have fallen) under that label, and is it worthwhile, even valuable to our own work, to reconsider our definitions and engagements?”  As we do so, we’ll respond in our creative work to the readings and think about how we might be influenced but not disrespectfully appropriative and what we might we learn about our work, community, and literary history that might be interesting or useful in our writing. In the larger experimental tradition – by which I mean beginning not with firm answers but rather with a series of questions as represented by the list of materials – this is the exploration I hope to undertake with you this semester.  We’ll see where it goes.

Not Nothing: Writings by Ray Johnson

Harryette Mullen, Sleeping with the Dictionary

Woolf, Virgina.  To the Lighthouse

(This spring’s “Theory and Practice of Poetry” will focus on translation.  We’ll start with a few essays about translation (Walter Benjamin, etc.)  as well as Auden’s “Making, Knowing, Judging” and then proceed to looking closely at works in translation.  We’ll begin with multiple translations of canonical works  --usually short sections of such works -- of western literature:  Psalms, Song of Songs/Solomon, Iliad, Inferno, some Petrarch sonnets.  We’ll also read 17 Ways of looking at Wang Wei.  We’ll move on to the twentieth century and look at multiple translations of works by Paul Celan and some other western European poets, perhaps Lorca, Montale, Akhmatova, Szymborska, Tsvetayeva and Mandelstam.

Students will work either on translation projects -- translating either a single work or selections by a single author – or they will engage with the work of an English-language “dead master” (Auden’s term), writing imitations, versions and works in conversation with that writer’s work.  Though we’ll be studying poetic texts, students are welcome to translate prose.  Fiction writers are most welcome in the class.

Starting in late March, each student will present the work either of the author they are translating or their “dead master” (they’ll choose selections of their work for the class to read, write a short position-paper – which students will read in advance -- and lead class discussion.  Each student in the class will do this once.

Students will have weekly writing assignments, which will invite a variety of approaches to their translation or dead-master projects.  About half of each class meeting will be spent discussing the assigned texts and half will be spent workshopping students’ weekly efforts.)

(This course will consider the Romantic lyric in the broader context of the genre and theory of lyric poetry since the Renaissance. We will survey a range of lyric forms (including the sonnet, ode, and elegy) and examine critical, literary historical, and definitional questions raised by the genre. Course assignments will include several short papers, one of which will be presented in class, and a longer final paper or project. Students with an interest in non-Western lyric forms, such as ghazal or haiku, will have the opportunity to develop projects focused on these traditions within the framework of the course. Readings will include poems by Wyatt, Surrey, Shakespeare, Milton, Cowley, Gray, Smith, Blake, Wordsworth, Coleridge, Shelley, Keats, and Hemans and critical and theoretical works by Wordsworth, Hallam, Mill, Hegel, Adorno, Brooks, de Man, Culler, Jackson, and Prins. Texts will include a course reader and The Lyric Theory Reader: A Critical Anthology, ed. Virginia Jackson and Yopie Prins (Johns Hopkins, 2014).